f I told you I have two simple tips that will give you more energy on less sleep and might even help keep you from getting sick, would you be interested? What if I told you it is all free?

I bet most of you would think “Snake oil…”

Turning Point: On February 14, 2014, I worked a regular day – most of the morning at my desk then four hours of meetings in the afternoon – and then I rushed home to take my wife and girls out for a Valentine’s dinner. After the kids were asleep we shared a great bottle of Californian wine and watched a sappy romantic comedy on Netflix.

At bedtime I had recorded a measly 5737 steps.

It was my second day in a row below 10,000 and after a week sick in late January I’d had a whack of recent days that had missed my target.

In that moment I realized I needed a bigger goal. Something interesting enough to warrant attention and more than a little ridiculous (because that’s how I prefer most everything), but still achievable given the time constraints of a full-time desk job and a busy life with two little girls.

I quickly settled on what I thought would be a fun year-long “mini-quest”. 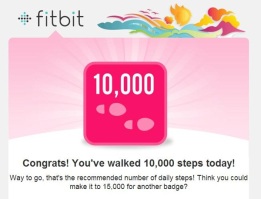 I’ve averaged over 10K steps per day since I started with Fitbit in March 2012, but my activity was quite variable. In true weekend warrior fashion I generally had a big 20-30K day on either Saturday or Sunday to make up for 2-3 low step days during the week.

My goal was to re-define the “lazy day” and really not to change anything at the upper end.

I am surprised to admit it actually doesn’t feel like it was much of a quest at all. It was exceptionally easy. There were no frantic late evening exercise sessions required. While aiming for 10,000 steps per day I found overshooting was inevitable. I actually had only a handful of days under 11,00 steps (16 to be exact).

Two Lessons Learned: I learned this goal could be easily accomplished with two simple adjustments, that I believe almost everyone can build into their life: 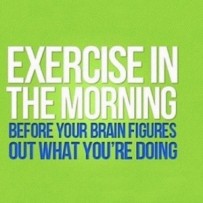 1. Build activity into your morning routine: I sit all day at work. If I do the minimum activity required – drop the kids at school, work, eat in my office and then drive home – I will be at about 1800-2000 steps at dinner. It’s daunting to try to fit in over 8000 steps in a few hours after work. Some evenings you are burnt out and just need to relax.

To avoid forcing myself into evening workouts, I committed to wake up a little earlier to exercise before breakfast (and before the kids get up). I’ll admit I have an advantage – I bought an exercise bike a couple years ago to rehab an ACL injury and it is very convenient to have something at home for dark winter days.

Most exercise bikes gather dust. I rode mine 274 times last year (stats tracked via RunKeeper), virtually always between 6:00-6:40am. This was less of an adjustment than it sounds. I just quit hitting snooze. Previously I would lay there trying to squeeze in just a few more minutes of sleep, waiting for my wife to clear the bathroom before I would shuffle to the shower. I cut that out and got moving. While my Fitbit One isn’t perfect for cycling (only 1 step per full revolution) it did kickstart my day. To mix things up sometimes I went for a run or to the local community centre gym instead.

2. Plan your steps:  With a desk job I need find opportunities to add steps and this takes a bit of planning. Generally I tried to plan at least a day in advance. If I knew my evening would be jam packed I might get up a few minutes earlier to add to my morning activity. I also found I could generally get away for a few minutes for a quick walk. At my regular pace a 16 minute mid-day walk not only got me 2000 extra steps, but also kept me alert for the afternoon and was often all I needed to reach my goal.

By planning out where I would get my steps I had no trouble finding opportunities to squeeze in a few more.

Benefits: I haven’t been sick in over a year, despite intentionally sleeping less. Not a cough or sore throat. Everyone else in the house has been sick at least once and I’ve managed to avoid it every time. I compare that to an earlier period in life when I worked full-time, did an MBA, had a newborn and paid almost no attention to exercise. In that two years I felt like I was sick every month or two. I’m not trying to claim that if you exercise enough you’ll never get sick but it does feel like there is a correlation.

Despite less sleep I also feel far more awake in the morning and I generally have way more energy throughout the day. The increase in energy then makes me crave a little more activity in the evenings. It’s a positive multiplier: More exercise leads to more energy, which makes me want to exercise more.

I’ll admit to some tired/lazy days but I found I could still use the exercise bike in the morning and just lighten the workload a bit and then simultaneously use the time (and my iPad) to plan my day, clean out my email and read or watch the news.

Weight loss wasn’t my goal, but you might assume it was also a benefit. That was not the case. My Fitbit Aria wifi scale tells me I am essentially the same weight now as a year ago. I can track this to my diet. While I exercise more, I also logged more calories on my food tracking app (myfitnesspal) so the net impact on my weight was basically a wash.

Over the year I actually came to the conclusion that the bar was set too low and 10,000 steps everyday started to feel too easy. I decided to up the ante and move to something tougher: 100,000 step weeks. I’ve managed to keep up that goal since mid-September and have learned that as long as I can still find one big day a week it is fairly easy to achieve.

Downside: I’m now a step junky and I tend to skip exercises – fun exercises – that don’t increase my step count. I am less inclined to go swimming as my Fitbit is not waterproof and lengths get no steps. Same goes for the rowing machine at the gym. These are great exercises but I have become too obsessed with step count.

The chart below captures step count in 1000 step buckets and shows my biggest days weren’t bigger or even much more frequent – the goal was to keep constantly moving to eliminate the low end of the scale.

When I kicked off the two things project I set a simple goal: Learn two things a day and blog about them for 66 straight days.

This post marks my achievement of that goal. To celebrate the accomplishment, for today only, I will go past my usual two things to reflect on what I have learned from the experience and to discuss next steps for this blog.

1. Be Consistent: Practice, practice, practice. I am not saying practice made me perfect, but it made me better. Looking at my early posts, one thing is clear. I wasn’t very good. With practice, I feel like I got better, or at the very least I got more confident. This led me to take more risks in my writing and at the very least helped me feel better about what I was doing.

2. Be Experimental: The most fun I had came out of trying new things.  Throwing Smurf into a conversation and finding enlightenment in the Honey Badger are just two of the things I would not have done without the blog experiment. As well, Email Free Day, The Streaming Diet and The Helping List have all improved my life in some small way.  Life gets better when you take a few risks and try new things.

3. Be an Artist: I didn’t need to buy brushes and an easel to create art, and the energy that flowed out of committing to create something new from nothing everyday felt amazing.

My behaviour also changed unexpected ways. One impact was in how I consume things.  After two months of blogging, Facebook is basically dead to me. It’s an exaggeration of course, but there is an aspect of truth to it. My consumption of media has shifted 180 degrees, moving away from passive sources and on to more active or creative forms. I was a classic Facebook lurker, visiting the site 3 to 5 times a day for several minutes just to see what other people were up to. Now I rarely visit the site – 1 to 2 times per week at most – and typically to communicate with a friend through messaging services. Instead, I now spend my internet-time reviewing sites that inspire learning and creativity.

4. Be fearless: This is easier said than done, and in truth it was an unintended result rather than an initial goal. When I launched the blog I was clearly fearful, and the emotion did not dissipate quickly. In fact, when it disappeared on day 24 I made a note of it. It was then that I realized my self-talk had shifted from “What am I going to write about today?” to “What do I get to write about today?” My post that day focussed on emotion, and at that point I finally felt fearless. Day 24 was also the first time I got up the courage to “publicize” what I was doing to people I actually know too – that is when I first referenced the blog on my personal twitter account (@darrenmcknight) and put up a link on my personal website (darrenmcknight.com).  The lesson for me?  Do something 23 times and it will finally get easier.

5. Be present: Learning facts is easy but the best lessons I learned came from listening to family, kids, friends, colleagues and even strangers.

At the outset I found I immediately listened more closely. This in itself was a good thing, but my motivation initially wrong. At first I was trying to find a “nugget” in my conversations that I could write about. Eventually this faded away and I simply felt more engaged.  Once I stopped looking for things to learn it was easy to focus on just listening. That’s when I started to find true nuggets.

All in all, this was a planned exercise in introspection and from my perspective it has gone very, very well. So well in fact that, goal accomplished, it is time to change things up a bit…

What’s next for two things I learned today?

The journey is not over, but the pace of blog posts is changing. I will still endeavour to learn and record two things every day, but from here on out I only plan to post a new blog piece when I feel the lessons learned contain ideas that are so “big” in my journey that I should share them with the world.

How often will that be? I really have no idea, and you will notice that I make no attempt to define “big.”

I will say this though: I have thoroughly enjoyed the self-reflection and creative outlet this blog has added to my life. With that in mind, some days big might be huge and some days it might be pretty small.  Hopefully, at least, big will be entertaining…