1. Twitter Strategy: Following yesterday’s post on the failings of my initial twitter strategy for this blog, I spent some time reflecting on the experience and researching alternative approaches today.

At the outset I described this blog as an “opportunity for introspection.” It strikes me that my personality is naturally pushing me to shift this goal towards an “opportunity for ego-stroking.”  There is a part of my brain that would love to know thousands of people are reading my work, but that strays decidedly from the point.  My intention with the blog was two-fold:

The result however is that about 5 weeks in I am already concerned with what other people are learning from me.

In the end this suggests to me that while I understand that developing a meaningful set of followers on Twitter will require a new strategy, this is not the task at hand.  That may one day become a goal for this blog. Today though, is not that day.

Instead for now I will stick to what I call “organic growth” – a small amount of self promotion via my own personal website, WordPress tags and the odd tweet. I don’t intend to employ “fertilizer” (e.g.tweet bots, meaningless direct messages) to draw in followers at this point.  One day, some day, not today.

2. Twitter Spam:  I recently started following Guy Kawasaki (@GuyKawasaki) on Twitter after a friend recommended his book, Enchantment.  I actually already bought a copy of the book too, but I haven’t got to reading it yet. I was looking forward to it though as it seems right up my alley – it adresses “The Art of Changing Hearts, Minds and Actions” according to the cover.

He appears to use an automated mechanism that posts tweet after tweet to fill your timeline, and then after a few hours it deletes those tweets from his history and re-posts exactly the same thing. Good content or not, constant re-posts always keep him on top of my timeline.

Apparently Red Aurora (tweets pictured below) set the night on fire, and seemingly the day too. First at 11:16pm last night I find Red Aurora noted in my timeline from 10 min earlier: 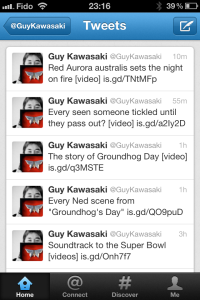 Then this morning at 9:27am, posted 2 hours earlier, the exact same thing, although with a unique short-link (and the initial tweet deleted):

There are numerous other examples too, but I don’t want to risk being called a hypocrite for trying to get the same point across 7 or 8 times.

If exposure is the goal, regardless of the content, then this strategy works well. @GuyKawasaki hit the top of my timeline before bed, and he was also the first thing I saw when I checked Twitter in the morning. To me though, it comes across as an inauthentic approach that is beneath someone who has generated meaningful content. He has written several popular books and yet on Twitter he focusses on mindless spamming. Basically, it looks like he just keeps throwing crap at the wall to see what sticks. Especially interesting for a guy with a link on his blog to a post called “How to not be annoying on Twitter.”

So, today I learned that regardless of whether or not I have a successful Twitter strategy, I have now discovered at least one approach that turns off the consumer in me.  The 491K other people that follow @GuyKawasaki probably don’t agree with me, but for now my plan is simple. #Unfollow.

I Dance at a Pre-School Level and If Nobody Clicks your Link does a Tweet Make a Sound?

1. I dance at a pre-school level:  I have never considered myself much of a dancer. Today I was presented with a wonderful opportunity to gauge my proficiency level.  With Mommy working, Daddy was on the clock for two dance classes this morning. The 2 year-old & parent participation class proved to be the most enlightening.

Bunny hopping? Jumping on one foot? Rolling on the floor? Listening quietly to the teacher?  One class and it is clear I’ve got all that down cold. Maybe it’s not that I am a bad dancer so much as I have not been assessing myself against the correct criteria.

2. If Nobody Clicks your Link Does a Tweet Make a Sound? When I launched this blog I started a new twitter account (@twothingsblog) to accompany it. My initial intention was to experiment and try to see if I could engage an audience and bring them to the blog with a “passive” account. The strategy was simple:

It didn’t take the MBA to know this strategy would ultimately fail, but I really didn’t think it would be so colossally unsuccessful.  One month in and I can report some statistics from my twitter account:

Lucky I was not trying to monetize this little blog experiment.

Based on my experience so far it seems I have located a colony of people that want to gain followers for no other reason than, I presume, ego-stroking. I don’t read their stuff and they don’t read mine. Seems a fair trade, but utterly wasteful for both of us.

This proved to me that, as I expected, a passive twitter account is not going to get you anywhere.  It might work for a few people with a tried and true message or those with a dedicated base outside twitter (e.g. @thisissethsblog), but if you are just starting out there is no substitute for hard work. Unless you engage others directly, and in a meaningful way, you are just another addition to the background noise.

It strikes me that the term “follower” is part of the problem. It seems relatively easy to gain followers, but that alone is not going to get you anywhere. If I was trying to promote a business via twitter I think I would try to redefine the term as “customers.” That might shift my perspective towards an approach that has more of a hope at being successful.

Time to develop a new Twitter strategy…or abandon the channel.