A wine-themed post today as I prepare to head to the Vancouver Playhouse International Wine Festival tonight.

1. Crutches: After much research I must conclude no one has invented a device that will allow me to simultaneously use crutches and carry a wine glass.

I had imagined someone would have come up with some sort of gryroscopic-like sippy cup device that I could hang around my neck, but alas I am out of luck.  The coolest thing I could find (pictured below and taken from a post at blog.winecollective.ca) looks good, but you still need a free hand. 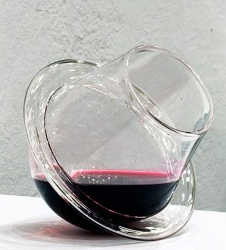 In the end all I really learned is that my wife is going to be carrying my glass all night. That is all on her though, because she won’t let me go to the Wine Festival tasting event utilizing my original idea (via bonappetit.com): 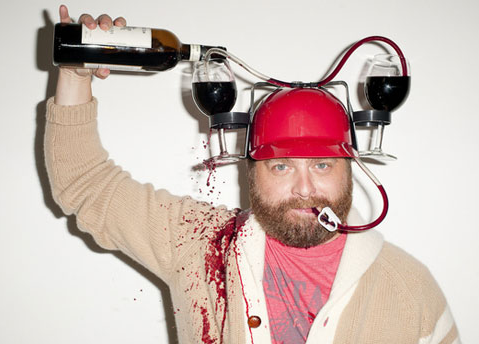 Wine is certainly present alongside many of the good times but hopefully it isn’t a necessary companion in the bad times.

This quote did teach me one lesson though, helping me avoid learning the same thing the hard way tonight. As I head out towards one of those good times in life, the quote reminds me that yes, wine is like a crutch, but do you know what else is like a crutch? An actual crutch.

If I want to ditch the kind of crutch helping me get around these days then I better go easy on the other kind tonight.

1. I’ll never be a wine writer:  I fancy myself as a bit of an oenophile – my expertise may be questionable, but it is improving and I at least approach the subject with a relentless enthusiasm to which the empties in my garage can attest.

That is why I am saddened to admit I would never make it as a wine writer.

This lesson hit me today, like the feeling you get after quaffing too much (or really any) Yellowtail,  as I read this month’s edition of Ask an Oenophile in BC Business Magazine. One quote sealed it for me:

Everybody should drink more Beaujolais. It’s romantic, it’s sexy, it’s lyrical, it’s ethereal. Really good Beaujolais smells like you just made out with your first love in a field of fresh strawberries – there’s a smell of wet earth, a little sweat, ripe strawberries…This wine, especially the 2009 vintage, has this incredible Audrey Hepburn character. It’s lithe, but there is this enormous charm and depth behind it all.

I could learn, but I need to be able to enjoy a nice bottle of Syrah and then respect myself in the morning.

2. Raising Successful Kids: I came across a thought-provoking blog post today about 5 Unusual Ways to Raise Successful Children (link below).

Several interesting points are made – I think there could be merit to the concept of giving incentive to learn from the masters. I particularly like one of the responses to the post which included a suggestion kids could learn alot from Ted videos. This seems like a viable way to introduce new ideas and it may be worthy of experimentation with our oldest daughter. With the recent explosion of TedxKids events, I expect age appropriate content may be more and more available, making this idea quite tangible.

The point I really keyed in on though was the final one in the article – teach kids to be powerful.

This led me to reflect on our approach to parenting. As the author recommends, we try to avoid any form of negative self-talk. We encourage the kids to avoid expressing actions in terms of accomplishment (i.e. “I am good at riding my bike,” or “I can’t tie my shoes.”) and instead we ask them to frame everything around the idea of practice. The thought is that this will ensure our kids understand that if they set a goal and then put in the time and effort, eventually they will be able to do whatever they want.

For example, when my daughter learned to stand up on skates, we congratulated her and then we talked about how the first time she tried she was not able to get up, but she practiced (by doing x, y, and z) and she gradually got better, to the point she was able to do it by herself. The idea is to re-enforce the concept that it doesn’t matter what you can or can’t do, it only matters what you are willing to put the time in to learn.

Thinking back now, this approach seems to be working.

Our oldest daughter now tends to frame her comments around the process of learning as the accomplishment, rather than the activity itself. We don’t hear things like, “Mommy, I cut my fish!” but rather she says “Mommy, I learned to use my knife!”  Hopefully in the long run this type of framing goes a long way to helping our kids understand that setting goals and practicing will allow them to do anything they want.

1. Restraint: When you publicly commit to start a blog on Jan 1, you should apply restraint on New Year’s Eve. Some lessons are learned the hard way. Some are learned after an evening with good friends sharing too many bottles of good red wine.

2. The fear of shipping is real: One of the motivations for this project comes from Seth Godin. Within his 2011 book Linchpin, he talks a lot about the concept of shipping, and the “lizard brain” that imparts fear in us and keeps us from starting anything that might be hard or potentially lead to failure. I won’t regurgitate his ideas here – I encourage you to read his book – but suffice it to say, the lizard brain is real. This insight comes from the knot in my stomach today. The fear of publicly committing to learn just two things a day (and to diarize/blog them for at least the first 66 days straight) is real, particularly when you have never made one blog post before, and you have never kept a diary. I had a sense this would be the case going into the project and I am hoping this exercise will help teach me how to quash that same feeling whenever I need to deliver something big or new.

What’s next for this space? Check out The Two Things Project and Bio pages for more info. Any guesses where my focus will shift through the year?